Further, the city has topped Forbes’ ranking list as ‘The Best Place For Business In North America” twice- in 2010 and 2013. In the same breath, NBC has repeatedly ranked Des Moines as being one of the Wealthiest Cities in America according to their criteria. Which, of course, implies ( albeit subtly) that employment in the city are among the best paying in this side of the hemisphere.

At a glance, The city gives off the impression of a financially-oriented city, thanks to the sizable insurance and financial firms in this metropolis. In fact, the area has time and again been referred to as America’s Insurance island, a reputation it has secured by virtue of the sheer number insurance powerhouses in this area. This has in turn created a respectable pool of well-paying jobs acting as a balance to the minimum wage ones already present. That said, here is a general overview of some of the cities’ lucrative career fields that you could venture in. 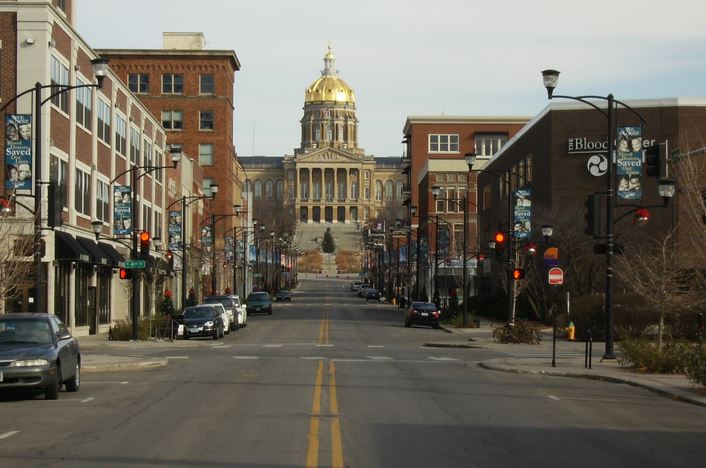 Owing to the mammoth number of insurance firms dotting the city’s Central Business District, to fresh graduates and experienced veterans in these fields, The capital is likely to be the proverbial ‘greener pastures’. According to a recent employment survey, the over 20 different insurance firms within Des Moines and it’s surroundings, account for 45% of the urban labor pool. Among these include powerhouses such as Principal Financial Groups, Fidelity and Guaranty Life, American Republic Insurance Company, Allied Insurance and Wellmark Blue Cross Blue Shield.

Besides, the area has repeatedly been labeled as the ‘Hartford of the West’, due to the staggering number of blue-chip insurance and private equity firms in this city.

It is also home to two Fortune 500 companies, and major corporations with headquarters outside Iowa have also strived to establish a presence in the city. Which includes the likes of Well’s Fargo and Voya Financial.

Second on the list of the most lucrative career venture in the city is the banking and commerce sector. Which actually resonates perfectly with the 2010 Forbes Report that alluded that the area was the ‘best place for business and careers’ that year. Major financial Institutions in around the city include ACE, Monsanto, and National Mutual Insurance Group LTD, with the latter offering a broad range of summer internships and graduate trainee programs.

Meredith Corporation, one of America’s leading publishing and marketing houses, is headquartered here. Most of you may be already familiar with the ‘Better Homes and Gardens’ magazine, which is one of the company’s most successful publication to date. Therefore, job seekers with a background in print media and journalism should feel right at home in the capital.

Like any other mid-sized American city, it hosts several branches and data centers of IT giants such Facebook, Microsoft, Anderson Erickson, and HP. Others include EDS and the business processing outsourcing gurus- CDS Global, both of which have extensive operations around Des Moines.

Drake University, which is located a few miles from Des Moines’ CBD, also commands it’s fair share of employment openings in the form of university lecturers, librarians, support staff and administrators.
The same way that Titan Tire, Firestone, Mid-American Energy Company and UPS have created a demand for technicians, mechanical and electrical engineers.
Lastly, the market for professionals in health-related niches is well taken care of by UnityPoint Health and Mercy Medical Center clinics in downtown Des Moines.